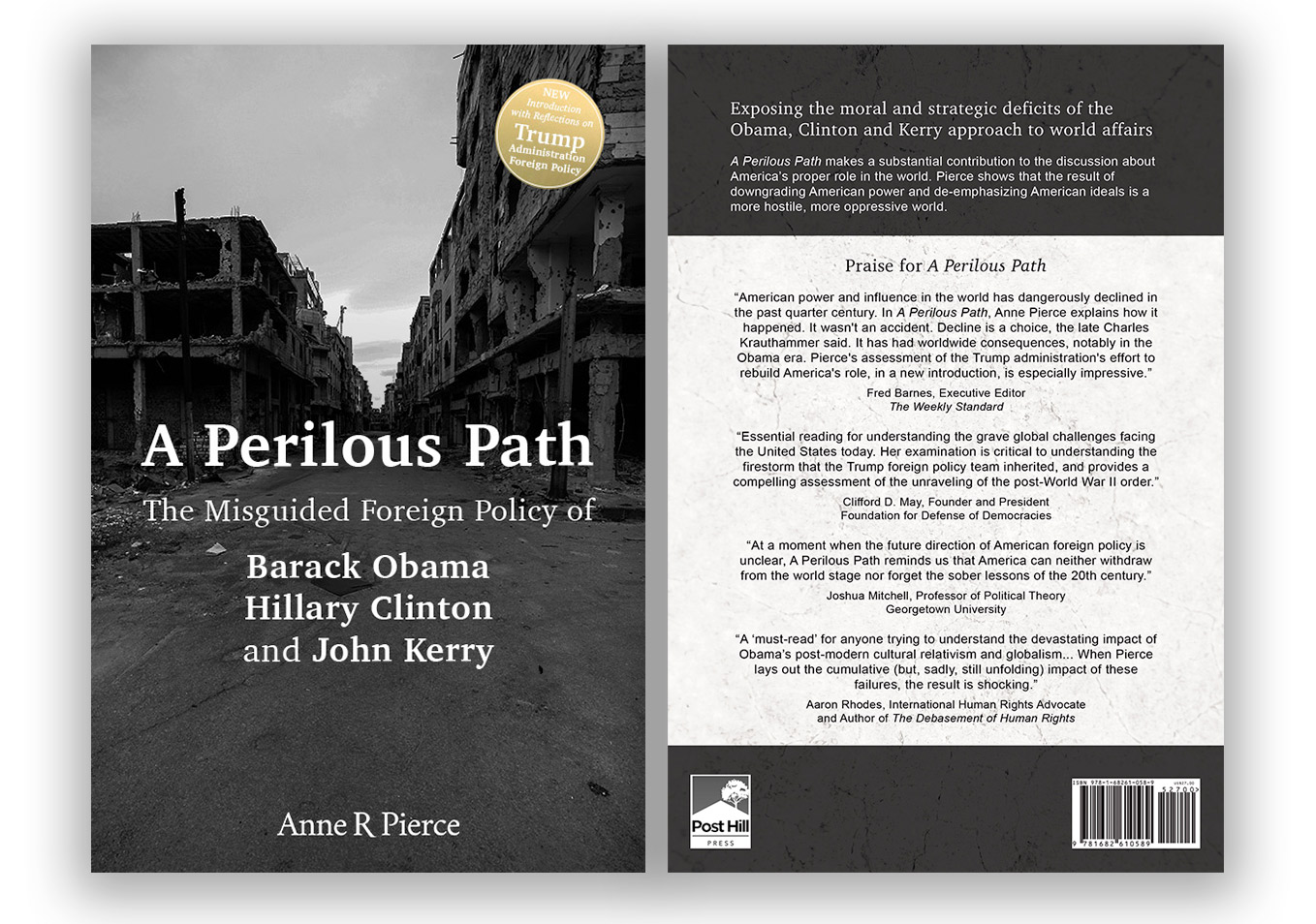 Exposing the moral and strategic deficits of the Obama, Clinton and Kerry approach to world affairs, A Perilous Path takes a close look at American history and the American foreign policy tradition, while at the same time providing a fresh, thought-provoking analysis.

Anne R. Pierce tells the fascinating story of Obama administration foreign policy and illustrates its disturbing consequences. She shows that President Obama and his Secretaries of State expended more effort in improving relations with dictatorships than in strengthening ties with democracies or encouraging ideas of freedom. The result of downgrading American power and de-emphasizing American ideals – of forgetting “peace through strength” and human rights – is a more hostile, more oppressive world. With meticulous research, Pierce documents the administration’s decisions and discusses its worldview. The book is now available in paperback with a new introduction on Trump Administration Foreign Policy.

A Perilous Path will make a substantial contribution to the discussion about America’s proper role in the world.

“American power and influence in the world has dangerously declined in the past quarter century.  And in A Perilous Path, Anne Pierce explains how it happened.  It wasn’t an accident.  Decline is a choice, the late Charles Krauthammer said.  It has had worldwide consequences, notably in the Obama era.  America’s defenses began to crumble. Support for human rights weakened.  Reliance on unfriendly international organizations grew at the expense of American assertiveness.  Pierce’s assessment of the Trump administration’s effort to rebuild America’s role, in a new introduction, is especially impressive.”

“Essential reading for understanding the grave global challenges facing the United States today, A Perilous Path provides a serious, sweeping review of U.S. foreign policy in the Obama, Clinton and Kerry years. Pierce shows that as the Obama team downgraded American defenses, de-emphasized American ideals, and made enabling deals with dictators, hostile forces gained momentum and threats to democracies grew. Her examination is critical to understanding the firestorm that the Trump foreign policy team inherited, and provides a compelling assessment of the unraveling of the post-World War II order.”

Clifford D. May, Founder and President, Foundation for Defense of Democracies

“In unrelenting detail, Anne Pierce’s A Perilous Path details the Obama Administration’s dreamy and dangerous foreign policy experiment, which was falsely predicated on the notion that the age of nations had passed.  The painful lessons of the first half of the twentieth century, crystalized in the hardheaded yet aspirational foreign policy of President Truman, were never more disastrously abandoned than under President Obama.  Under his recent auspice, America’s influence abroad has diminished, and the world itself become less stable and more hospitable to tyranny.  At a moment when the future direction of American foreign policy is unclear, A Perilous Path reminds us that America can neither withdraw from the world stage nor forget the sober lessons of the 20th century.”

“Anne Pierce’s latest work, A Perilous Path, is a closely documented history of the Obama administration’s foreign policy and a “must-read” for anyone trying to understand the devastating impact of Obama’s post-modern cultural relativism and globalism. The book includes concise, thorough summaries of the human rights situation in the world’s hot spots, focusing on Syria, North Korea (DPRK), China, and Russia, while providing needed context for the analysis of US policies. When Pierce lays out the cumulative (but, sadly, still unfolding) impact of these failures, the result is shocking.”